SAVE ABERDEEN SYNAGOGUE AND COMMUNITY CENTRE 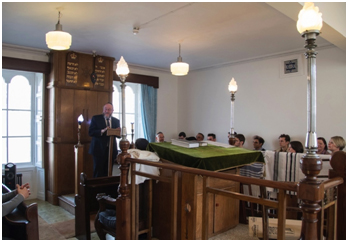 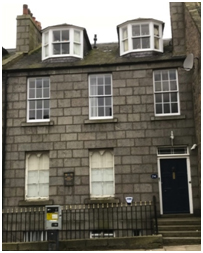 The UK’s most northerly synagogue is without a home for the festivals following serious flooding. Aberdeen’s community of barely two dozen members had overseen a major upgrade of the four-floor building over the past two years, which along with concerted efforts to run both religious and social activities, had refreshed and revitalized the community.

However, the building is no longer fit for purpose and extensive repair work is required, because, as the community’s Debby Taylor says, “Everything is wet, damp and smelly”.

The community faces a choice – close its doors, or face the estimated £30,000 cost of drying out and refurbishment, of which only two thirds will be met by insurance.

Without the shul building, which also includes a communal hall, this tiny community is unlikely to survive.

The Aberdeen community is extraordinarily vulnerable, as some of its members have been subjected to regular antisemitic harassment that has now reached the courts. The shul building provides a safe space for the members and also a welcoming environment for Aberdeen’s thriving Jewish Students’ Society and the many Jewish and Israeli visitors to the city.

Details are on the Aberdeen Synagogue and Jewish Community Centre home page:

This is a national appeal supported by the Scottish Council of Jewish Communities, the Glasgow Jewish Representative Council, Edinburgh Hebrew Congregation, Jewish Student Chaplaincy Scotland, the Board of Deputies of British Jewish and the Jewish Leadership Council.